Collectin & Livin In Texas Is Great...Just Ask Any Texan! 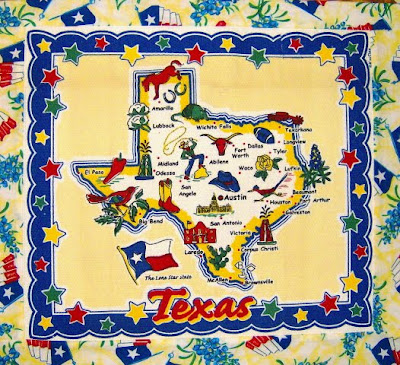 Texas is a State of Mind. Texas is an Obsession. Above all Texas is a Nation in every sense of the word. John Steinbeck

Texas has it’s own language.
Just ask any Texan!

For instance, in Texas all sentences should end in a preposition, and tho English is the primary language used in Texas, for some reason, you have to learn Spanish in order to understand it.
Comprende!

While we're on the subject of Ask Any Texan...This GRIT sez...
If you follow the ‘Word Links’ I’m droppin like CowPatties on a CattleDrive, you’ll browse around the BiggerNTexas WWWeb (one of the few things Bigger) and learn lots of
Texas History…Texas Jokes…TexasCountry Reporter…and about…Texas Folks.
So, Ya’ll CheckEmOut...Later.
Right now, I’ll share some CollectInTexas Gal's Quilt Blocks that will someday be my 'Texas My Texas' Quilt.
So sit back in your Saddle, TipBack your Stetson, and YeeHaw!!! we're off. 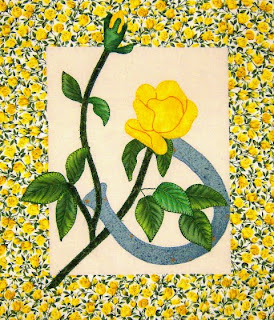 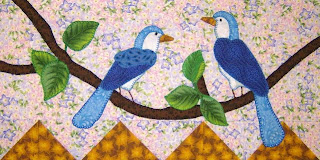 The Texas State Bird is the Mocking Bird 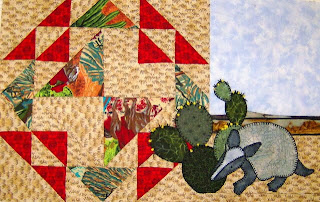 The Texas State Mammal is the Armadillo....Really! 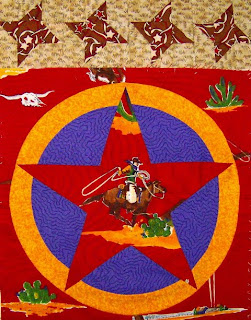 Texas is known as the 'Lone Star' State and as the 'Friendship State' as seen in this block of Stars.

Now, alota folks still think of Texas as the Wild West and a bit 'Behind the Times'. I figure this is a good opportunity to let Ya'll know that Texas has been way ahead in the world of Technology as is evident by this report...
Bubba's Better In Texas...After having dug to a depth of 10 feet last year, New York scientists found traces of copper wire dating back 100 years and came to the conclusion, that their ancestors already had a telephone network more than 100 years ago.

Not to be out-done by the New Yorkers, in the weeks that followed, in California an archaeologist dug to a depth of 20 feet, and shortly after, headlines in the LA Times newspaper read:
'California archaeologists have found traces of 200 year old copper wire and have concluded that their ancestors already had an advanced high-tech communications network a hundred years earlier than the New Yorkers.

One week later, a local newspaper in Texas , reported the following:
After digging as deep as 30 feet in his pasture near Cut-n-Shoot, Montgomery County, Texas, Bubba Rathbone, a self-taught archaeologist, reported that he found absolutely nothing.

Bubba has therefore concluded that 300 years ago, Texas had already gone wireless.
Here's Some HiTekieTexas PCLingo....So You CanBe UpToDate, too! (From TexasJokes)

HardDrive – Trying to climb a steep hill with 3 flat tires pulling a load of _____fertilizer.
Keyboard – Place to hang your truck keys.
Window – Place to hang your gun.
Modem – How to get rid of your dandelions.
ROM – Delicious when you mix it with coca-cola.
Byte – First word in a kiss-off phrase.
Reboot – What you do when the first pair gets covered in barnyard stuff.
Network – Activity meant to provide bait for your troutline.

ROTHF~~~ I am a born Texan and so is my Honey Honey. We live in the Peach State (Georgia) but we are Texans! Love this....my Mom and my brother and family live in Texas so I visit often.

Sue, I just had the best time reading all that Texas stuff. Still laughing. My sister lived in Texas a few years and her daughter, my niece, still says 'don't mess with Texas.' My nephew graduated from a Texas collage. At this moment I do not remember which one. (don't tell him) He LOVES Texas.

Thanks for the Texas entertainment.

Now you know this Texas girlie is grinnin' from ear to ear, and for those that still don't understand about us Texans....well...."bless their heart." Can I get an amen? :) cute cute cute!!! love your blog!
♥ Teresa

Your passion for your state makes me love it, too!

I'm a Texan so totally understand this one!
Thanks for sharing the Texas humor. I left a little Texas humor for Pink Saturday this week....a longhorn decked out for the holidays. Only in Texas! ~ Sarah

I can always count on getting a giggle and a chuckle here at your post. Lovely quilts. Blessings!
Gwen

I just loved all of the quilt squares! The Mockingbirds are wonderful! Through the weeks leading up to Christmas, I did not get to visit as often as I had been and it is always a delight to catch up on your wonderful creations! Thanks for visiting and come back soon. ♥♥Kerrie