Through Her Eyes Thursday - Stories of Women In My Family Tree. 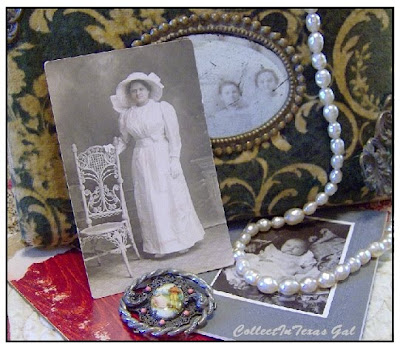 Without the Album of my fraternal great grandmother my family tree's female branches, twigs, and roots would not be known to my generation or the  generations to come.
I inherited the 1900's Album with photos and memorabilia that offered little to no clues of who they were.  So, began years of photo detective work, ancestry research and piecing together a family history that dates back to Colonial America and a 5th Great Grandmother who defied the British Torries.
So, as this is the beginning post for 'Through Her Eyes Thursday' I will begin with her story.
A five times Great Grandmother is a wonderous discovery in anyone's ancestorial research, especially when you are rewarded with names, dates and a story of her achievements that has been passed down for generations.  Just knowing her name as the Mother of my Direct Descendent was in itself a satisfying genealogy bit of information.  It is after all, quite a challenge tracing the women in one's family tree, due to the traditional practice of women assuming their husbands surname.
In Virginia, when my 5xGreat Grandmother married on May 1, 1747, marriage was performed by ministers of the Church of England.  Ministers were required by law to file marriage certificates with governing offices, however,  the laws were rarely enforced, resulting in many incomplete or nonexistent certificates.
Although women were treated as second-class citizens during the 1700's, their roles as women and mothers during the American Revolution gave rise to The Articles of Confederation and the important part they played in support of Republican Motherhood.  She encouraged her sons and husband to be soldiers, she boycotted particular goods and supported the causes of the Revolution by speaking out at home and in public. 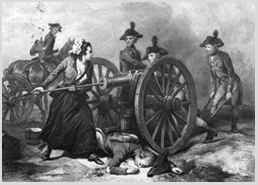 ~In 1778 John Pittman was reported in the South Carolina Militia as a Ships Master. *Georgia Revolutionary War Soldiers Graves by Arnold and Burnham, 1993 pg 576. Other Documentation: The Roster of South Carolina Patriots In The American Revolution.
~ John Pittman is also listed with the Rebels who kept watch on the Savannah River Crossings. On the Muster Roll of Capt. Ephraim Mitchell’s Company of the South Carolina Continental Regiment of Artillery Encampment at the Two Sisters Ferry.
~Sons of John Pittman and Mary Polly Rowe Pittman
Served in the Revolutionary War:
*John Ichabod Pittman
Buckner Pittman
James Greene Pittman
Phillip Pittman
Timothy Pittman
The Torries Raid on John Pittman Homestead
While John and his sons were away fighting in the American Revolution the Torries raided their home on Kiokee Creek, Georgia.    The house was ransacked and Mary Polly was thrown off the porch while trying to defend her home. She suffered a broken hip which left her crippled for the rest of her life.
Her achievements will linger for generations....

Email ThisBlogThis!Share to TwitterShare to FacebookShare to Pinterest
Labels: Through Her Eyes Thursday

Oh that's so great, to have Mary Polly Rowe Pittman found in your searches for ancestors. thanks for sharing. (I had a few South Carolina patriots in my family tree also!)

Yes, Barbara, it was the find of all the early research. It opened up such a wealth of information that it took several years of story telling and Family Tree Branches. Thanks for stopping by. I'll be by to visit you latest post on one of your blogs.

Sue, Mary sounds like a woman I would have liked to meet! I have been told by a few Southern women, that you just don't mess with a southern woman! Although I am very sad to hear she was permanently hurt, I am still glad that she stood up to the British!

Diane, she would be on the top of the list for ancestors I would like to meet, too. Just imagine the stories she could tell. Thanks for visiting.