Vintage Sewing Basket Finds...If Only They Could Talk 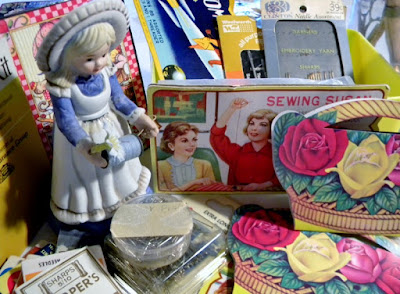 Sorting sewing stuff today.  Mostly old pin boxes and needle packs that have been stored in a bottom drawer for ages.  Some are from antique and thrift store shopping where I couldn't bear to leave someone's sewing basket with it's bits of lace, spools of thread, half empty needle packs, buttons and other assorted odds and ends that accumulate in the bottom of a well used sewing basket. 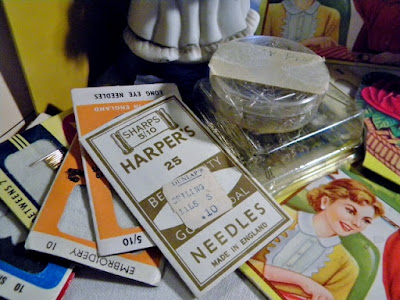 I'm sure at one time, I thought I would use the needles, pins, and sewing machine needles, and I have.  This stash has come in handy over the years for a special size needle or a photo shoot...for instance this post...What's In Your Sewing Basket? 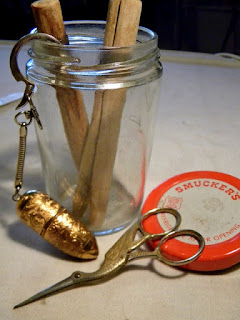 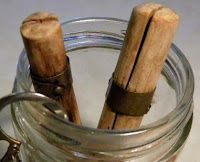 Occasionally, an old sewing basket will yield a few truly unusual things that may not have a thing to do with sewing.  Like the two very old handmade clothes pins.

After a Google search, I finally found an example of these rare hand carved clothes pins.  They were attributed to perhaps a pioneer woman who carved them from a tree branch then wrapped scrap metal around the ends so they wouldn't split open.  If only they could talk.

Then there are the items you know are sewing related.  Like the Stork/Crane Embroidery Scissors marked SECO Germany made by W.H. Morley & Sons, a German manufacturer of pocket knives, straight razors and similar tools.  Founded in 1913, the company closed in 1927.

Wondering why they are referred to as Stork Scissors?  They are believed to have begun as birthing scissors used by 19th Century midwives to clamp and sever the umbilical cord after a baby's birth. The forceps/clamp scissors originated in Europe and were produced in metals ranging from brass to solid silver.  By the late 1800's, the novel stork design had been adapted as a popular sewing tool that is still reproduced today.  Mine were made between 1913 and 1927 and are valued between $20 and $40.  If only they could talk. 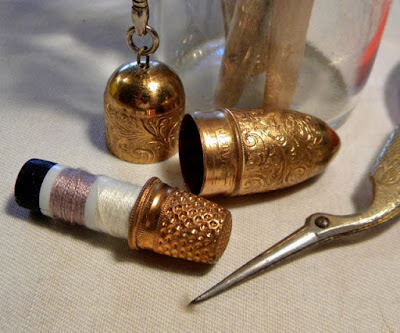 Perhaps the most intriquing item found in the bottom of a sewing basket and subsequently dismissed as a trinket...because of the keychain, is this Needle, Thread and Thimble Kit.  What a surprise to discover it came apart and inside was the thimble, thread and inside the thread tube...needles. After careful inspection, it was obvious the keychain was not part of the original piece.  Even closer inspection with a magnifying glass revealed the engraving on the inner ring of the cap...Austria.
Again, another search on Google and found it on Ebay described as an Antique Austrian Engraved Brass Bullet Sewing Kit. It was listed as used, was missing the wire and had a few spots, but was described as in excellent condition for $59.99.  Mine is in Mint Condition and doesn't appear to ever have been used as anything but a keychain fob...OMG! 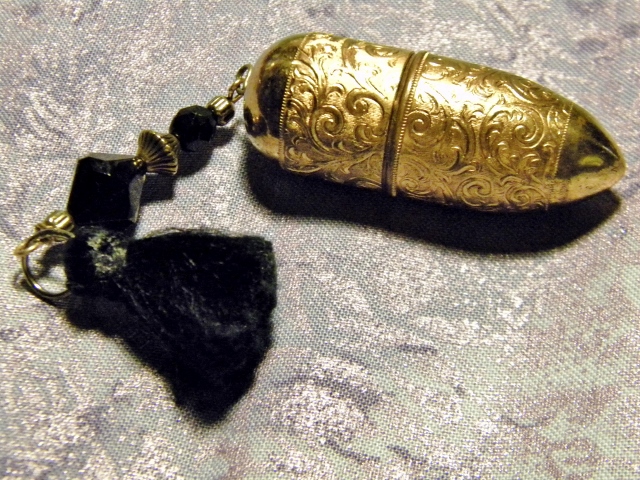 Originally this incredible Sewing Kit may have dangled from a chain hung around a Seamstress' neck and was referred to as a Chatelaine. For now, mine is adorned with a beaded tassel and will go in my 'Collectible Jewelry Display' at my Shop.  If only it could talk!
Posted by Sue McPeak at 8/01/2017

So glad to see that I am not the only one that rescues sewing baskets. Yes, that is what we should form - The Sewing Basket Rescue Squad (of 2). That reminds me I have the contents of a recent find to post also.

I got my grandma Olive sewing basket but it nothing fancy...Coffee is on

That sewing kit is great. I have one of the sewing ladies (top picture), but, mine is painted yellow, while yours is painted blue. I found mine in May, at an antique shop.

sewing basket? What's that? I think I can put my hand on some white thread and a needle. It's probably rusty from lack of use. Ha! The closest I get to sewing is reading your blog (which I enjoy)

That sewing kit is wonderful. I don't have my mother's sewing basket anymore, but I do have some of the contents...vintage thread, needles, and maybe a couple of thimbles. They are over 50 years old now. Alana ramblinwitham.blogspot.com