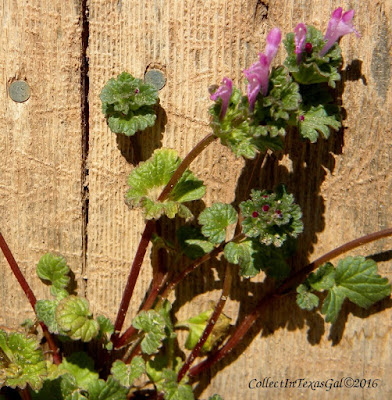 For years I have saved this flowering plant from the 'Weed Wacker's Wicked Knife' under the auspice that anything that flowers in Texas is not a weed.  He...the 'Weed Wacker'...agreed to leave them in the rocks and along the edges of borders and fences.

But NOT in the middle of his lawn!

For years, he has assured me this pretty bright pink flower is most definitely a weed and a menace in the grass.  But then, anything other than blades of Bermuda and Saint Augustine are weeds and target for his wicked knife.

Yes he weeds with a knife.

Once again I saved this February Flowering plant from the knife, and decided once and for all to prove or disapprove it's botanical species.  By the way, if it turns out to be a Texas Wildflower...it get's to thrive among the blades of the lawn.  The 'Weed Wacker' agreed. 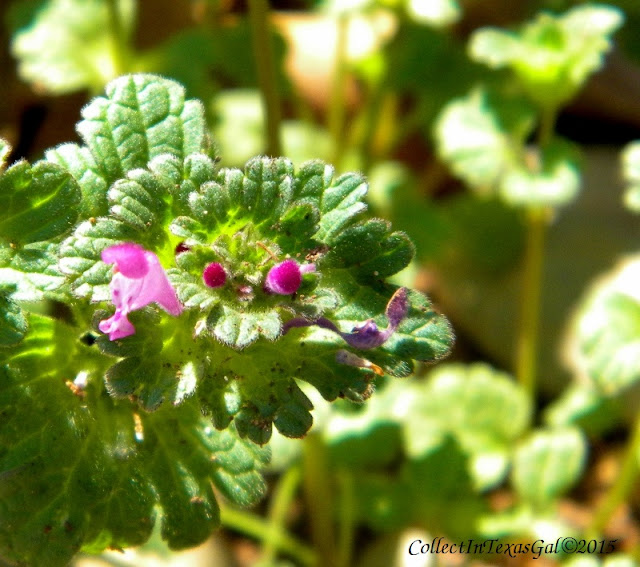 It is called 'Henbit'.
It is not a Texas Wildflower although it is beginning to bloom along the roadsides like the Bluebonnet, Indian Paint Brush, Wild Verbena and others.  It's early greenery is sprouting and the tiny buds are blooming in manicured lawns, early flowering gardens and landscaped rock gardens.  Why so early in February?  Because the 'Weed Wacker' and other 'Weeder's' did not treat their lawns and gardens with a Pre-emergent aka Wicked Knife. 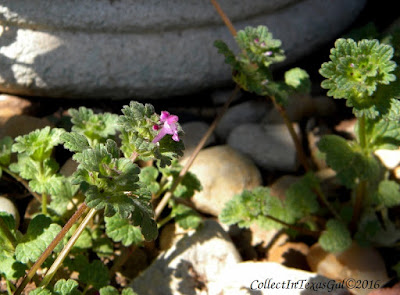 It is a WEED.
Not even a native weed, but a pernicious non-native one.
pernicious...having a harmful effect, especially in a gradual or subtle way.
synonyms:  damaging, destructive, wicked, malevolent, noxious, poisonous.
It is a winter annual and will be dead by late spring but drops, many, many seeds!
Mark one for the 'Weed Wacker' and his Wicked Knife.
Posted by Sue McPeak at 2/28/2016

But it's so pretty! Nothing is growing around here yet, and probably won't till May.

I've learned to be wary of those beautiful-but-pernicious invasive non-native species. We wage yearly war against Scotch Broom here. A beautiful yellow, but a terrible and invasive plant that is gobbling up our oak meadows.

Hi Sue - it's a weed here too .. but is pretty and so often weeds have offerings for birds, tiny mammals and insects ... with their flowers and seeds .. and the roots will stir up the soil. Cheers Hilary

Oh yes, henbit. It's a weed here, too. I have plenty of it. But I forgive it, because it is one of the earliest things to bloom here in upstate New York. Alana ramblinwitham.blogspot.com

Are you up to calling HiHoney the Weed whacker these days? Laughing and Smiling here! I am so happy I stopped by but also so sad for the passing of our dear friend Smiling Sally. :-( I have always thought that you and Sally had the neatest wedding stories. I am sure going to miss her leading us through those Blue Mondays. Thank you Sue for stopping by to visit me. Blessings, Anne