...of an Underclassman.
Sandra Sue Pittman
Room 8-A Jr. High 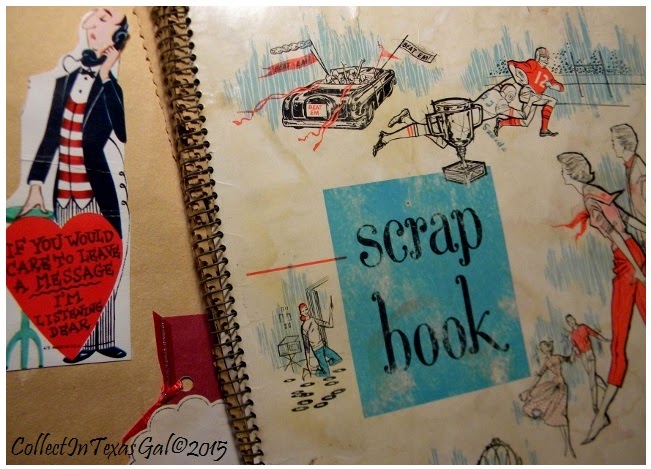 Having written my name and location on the inside of the cover of my first scrapbook was probably the most useful piece of information in the whole book.

It survived mostly due to the cover being a heavier weight paper than the rest of the pages which have yellowed and deteriorated.  Scotch tape, Elmers glue and manila paper were not Acid Free.  I don't think Acid Free was invented yet, and if it was it wasn't free.

Being as it was my first scrapbook and being an 8th grader with little to no momentous scraps of information to paste on the pages about myself, I proceeded to cut and paste pictures and articles from the school newspaper about Upperclassmen.

For instance on the first page the headline read...
G-R Sweethearts Crowned September 2: Crouch, Warner Receive Honors
Irma was crowned Band Sweetheart and Charlotte was crowned Football Sweetheart during the half-time of the first football game.
Now I ask you, of what use would that information from September 1960 be at the time...everybody got the school paper and were at the football game to witness the crowning and watch the Cowboys Brand the Longhorns In The Season Opener.

Useless Information... Until....Charlotte's sister Sharon became my sister-in-law then it became a Useful bit of family trivia when reminiscing about the good ole days over Thanksgiving dinner at Tommy and Sharon's with Charlotte sitting across the table. 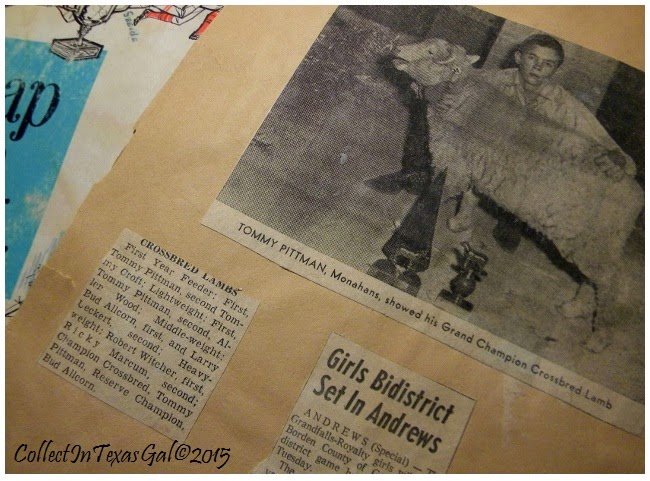 As I look at this newspaper photo of my brother and his Grand Champion Crossbred Lamb, I have no doubt I considered it worth saving and pasting in my Scrapbook.  He was not a scrapbook kind of guy, and I felt sure the day would come when this...at the time...Useless Information would become Useful.  Now is the time....
Hi Tommy...Here's your chance to be useful.  First, what category of crossbreed was your Grand Champion?  Second, what ever happened to Bud Allcorn?  Lastly, please ask Sharon if we beat Borden County for Bi-District in Andrews.
I have saved this clipping and these pictures, but cannot find the clipping to know if we advanced to Regionals.  She will probably remember since the article lists her name before mine as starting forwards, and her cousin Lea was mentioned as a starting guard after Nancy.  (FYI...Sharon and Lea were Sophs...my friend Nancy and I were Fish...it was Upperclassmen vs Underclassman)

Picture #1...back row l-r...Sophia, Irma, TLee, Sue: front row l-r...Charlotte, Sharon and Nancy...Varsity Basketball Team 1961
Picture #2...l-r...Sharon, Lea, Sue, Nancy and Manuela...Starters for Bi-District game in Andrews.
Usually, I like to tie all the loose ends together with something profound if not down right prophetic.  In this instance I may have already covered the prophetic part way back in 1960-61...who would have guessed my brother would marry the Upperclassman who could pass a basketball so hard and accurately that my fingers spent the better part of the season in splints.  Who could have known that Queen Charlotte would one day be a part of my family holidays.
No one would have ever predicted that Guard Lea...who threw my clothes in the girls locker room shower on a daily basis and forced me to walk home looking like a 'drowned rat'...would someday become a fun and friendly cousin-in-law.  I forgave her for the locker room shenanigans, but I'm still working on the 'SNAKE' that slithered out of my locker!
As for the profound...There is no such thing as USELESS information!!!
Posted by Sue McPeak at 4/24/2015

Sue you are so darn cute I picked you out of that photo before I saw your list of names! LOL! I have known you a long time! My husband recently lost his oldest brother and the remaining siblings wanted photos so we shared and I have a collection of my hubby's youngest brother John when he was a kid. My oldest daughter has all the scraping stuff at her house two doors away because she is lucky to have a Scrapbooking Room! I want her to help me create a small scrapbook for him. One baby photo shows him holding a bowling ball! Cracks my daughter up every time she sees it! LOL! Plus my wedding anniversary is coming up and I want to add more pages to that story! Between Jeremy moving into his first home next week, Nick coming home from college, needing a new roof and the HUGE remodel at my honey's office, affording him a ton of overtime, we catch ourselves coming and going. LOL! I lost my job in November 2014 and need to seriously find work. But I have managed to organize a bit of my home ! Now when he starts painting....it is never ending! Sigh!
Always my pleasure to visit you and say hello. You share such great stories. I love it!

nope - your "useless" info is such an awesome collection of history. Each post in this A to Z has amazed me more and more. You are an historian storyteller and archivist. Most impressive. And you are funny too. Happy weekend

Hi Sue - definitely useful pieces of information .. funny - who would have thought that decades on bits of bumph could prove useful .. without the internet .. I suspect it'd still be pasted away behind the scrap book card! Cheers ...Hilary

Now I wish I had saved more of my stuff from my school days. No telling what funny memories I could have had.

Hey Anne...so great to receive one of your newsy/catching up comments. As always I love it when you visit. I'll return this comment via email for a longer visit.

Yay, I feel like I've been given another certificate/license. I'll be thinking about how to word my new
'Shingle'. What do you think about 'Pants On Fire Archivist' ?

Without the internet and the AtoZ Challenge my Scrapbook would have continued to deteriorate to the point that even Acid Free sheet protectors would render it useless.

Oh, I think you have saved quite a lot of funny memories with the Family Photos, Family Names and Stories you have written. And don't forget...you have put the 'Fun' in Funeral.

It's good you have those things saved so y'all can reminisce, tease, laugh!
Visit me at: Life & Faith in Caneyhead
I am Ensign B of Tremps' Troops
with the A to Z Challenge

Snake - eeewwwwwww! Those are great cuttings - I've never really been a scap-booker, but there are so many things I wish I still had. Luckily my sister is more of a saver of such things and she kept a few interesting reminders :)
Tasha
Tasha's Thinkings | Wittegen Press | FB3X (AC)

Yes, it has been, and believe me I love teasing my brother. He get's a kick out it, though!

That's what my sister says!

I so love the idea of having this 'pieces of the past' saved away. I've never been a journal girl. I tride to keep a journal when I was in school. Didn't work. I prefered to write stories back then too. I also tried to keep a scrapbook. Didn't happen either.
I suppose it wasn't in me, but now I regret not having those little pieces of past with me.