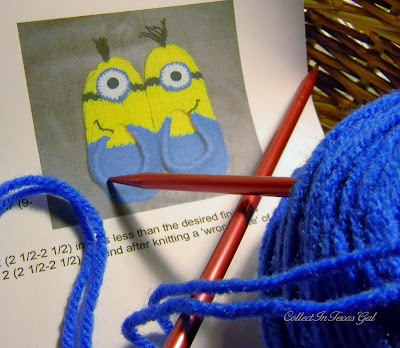 While watching Despicable Me2 the other night, I found myself singing along with the Minions Banana Song just as I had with the Beach Boys back in 1965. The 21st Century Minioneze  BaBaBanana tunes right up to the BBoy's 20th Century Rockin' and a Reelin'  BaBaBarbara Ann.  Check it out:
The Minions Banana Song on U-Tube HERE and the
Beach Boys' Barbara Ann on U-Tube HERE.
Another example of 'What Goes Around....yada yada yada!!!!
Now this is not a Review or a Plug for the movie.  I will leave that to my Grandson who watches it 24 and 7 and speaks Minioneze fluently.  What this is....is a Slipper Sizing Pattern Test. 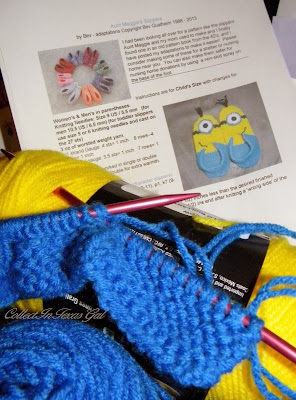 For once, I am Size Testing a Slipper Pattern...as this is not my first Rodeo at knitting slippers for grandkids who just gotta have them sooner than later, and then never wear them.

Although, knitting slippers is not like knitting a sweater which I have had some experience in starting and none in finishing.  No, it's more like knitting Socks in that it takes TWO...one for each foot...another example of my excellent starting skills.

I have long been afflicted with SSS...Second Sock Syndrome...which is quite apparent when digging through my sock drawer.  I am determined not to let the Second Sock aversion morf into Second Slipper Syndrome.

Therefore, this first PAIR of Minion Slippers are being made at the same time on one set of needles...which is going to cause a shockwave of dropped stitches among my knitting group.  Not only that, but my Grands are not getting the first PAIR....I AM!!!!

Oh Yeah....BaBaBarbara Aaaannnn!
Here's the LINK to the Pattern if you would like to Size Test a Pair for yourself...
or your Grandkids!
Posted to DayByDay....MadeIt~ShowIt Monday
Linking To:
Smiling Sally's Blue Monday
Posted by Sue McPeak at 12/29/2013

Cute, Sue!
I am so sorry for your loss and I hold you in prayer. The Lord is near to the brokenhearted.

Sue, I wasn't allowed to comment before but wanted to express my condolences.

You are going to have warm, happy feet when you finish these!

Thanks for playing today.

I've never seen that movie, but the slippers are so cute! I can't wait to see a picture of the completed slippers.

Have not seen that movie or any other in years. Not many I like. I am from the old generation and they do not make movies like that anymore. You are doing great on your knitting.

Very cute, love your knitting. Had to send the youtube link to my hubby because he is a huge fan :)
Have a Happy New Years!

Cute slippers. I don't seem zoo have the dreaded SSS. I'm slow but I have several pairs of socks. Haven't tried slippers since I made booties for my own kids.