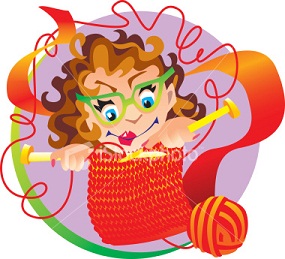 How in the world are Ya'll?
I'm asking because I've been absent from CollectInTexas Gal, Tracks of My Texas Ancestors and Blogland in general for over a month!!!! Really, has it been that long??? It has, and I've missed everyone!!!

I bet your thinking, "Wow, when that Texas Gal decides to take a break, she must have had a 'BreakUp or Down or is just plain Ol BrokenDown!

I have to admit to being a bit of the Ol BrokenDown...and I thought I was a 'Superwoman Senior' after havin' the 'Big 65'. Anyway, this 'SuperSixtyFive Senior' is back on track...albiet a bit slower one than the Olympians have been racing around in London.

Aren't those SuperWomen Athletes amazing?  Have you ever played 'Beach Volleyball'? I have...and let me tell you it 'ain't no walk on the beach'! You'd think taking a dive in the sand would be a nice soft landing...HA!!!...it's like bouncing off concrete. Have you wondered why the Beach Volleyball players aren't covered in sand? I was wondering the same thing, because when I played on the beaches of California umpteen + umpfifty years ago I came up with a mouth full and was covered from head to toe. Well, I found out about that just this week....I'll tell you in a little while.

So stick around while I have a
'SuKnitWitty Show and Tell'.

Saying Adios to 'The Yarnsleuth' 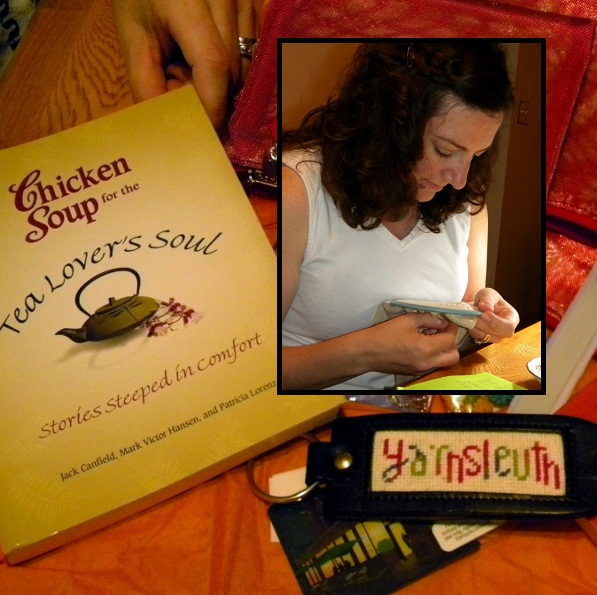 It's going to take alot of Chicken Soup and Tea steeped in comfort for The Wednesday Knitter's
to get over missing our Knittin' Friend Gretchen...aka The Yarnsleuth.

We 'Tea Toasted' and shared a special Wednesday together as
Gretchen is returning to her Old Kentucky Home. 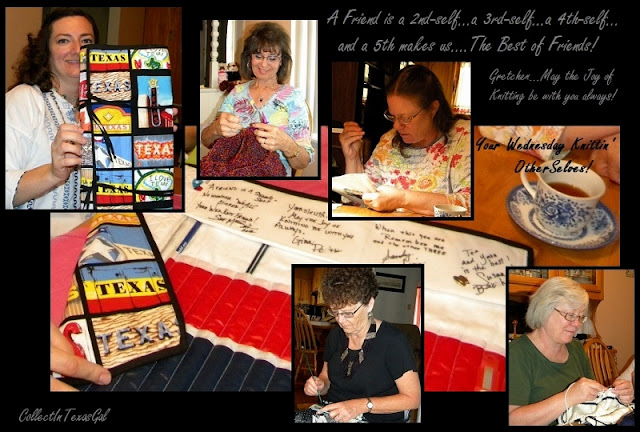 Once you've been a Texas Gal.....Always a Texas Gal!
So it's just Adios and SoLong for now Gretchen!
We never say Goodbye Forever in Texas!!
We know you will be back!!
Until then...
When this you see...remember me and the other three!!
Oh...and have some Chicken Soup! 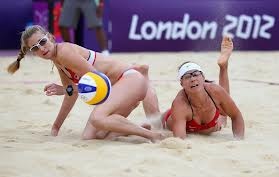 Now about that Beach Volleyball Court Sand...How do beach volleyball players manage to avoid the billions of granules of sand that cover their sport's playing surface? Because it's not the same sand that gets between your toes when you go on vacation. The sand used in competition is heavily regulated by the International Volleyball Federation. There are no pebbles or bits of shells. The shape ensures a smoother grain. The size is Goldilocks style: not too small or too big.
Why doesn't it stick?
Because it's designed not to.
So there ya go....Designer Sand!!!
Read more HERE.
Posted by Sue McPeak at 8/09/2012

What the heck? Well why can't they create non stick fat? You know...you eat it and it just slides on out!

Glad you are back and I like it that Texans don't ever say goodbye.~Ames

Hi Sue!
Cute picture of the Wednesday knitters!
What are YOU knitting?

YES..I have been away for a year....
sorry you lost a friend, but maybe she will be back! I am trying to catch up a little at a time, please come and visit me!

I'm glad to see a post - I've been missin' ya! Obviously you've been reading my mind because I've been wondering about that sand. Those beach volleyball players certainly must sweat but nope, no sand on those sweaty limbs.

Well how about that? Designer Sand..my goodness!! Welcome back!!