Nestin' In Texas with Redheads, Dovey, Lovey and FlipFlop Flamingo!!! 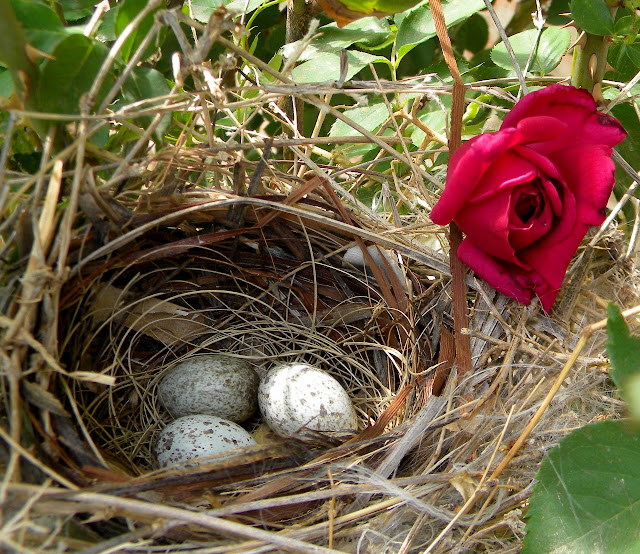 Have you ever seen a Cardinal Couples Nest and eggs?
Look what Mr. and Mrs. Cardinal have built in The Red Rose Bush! 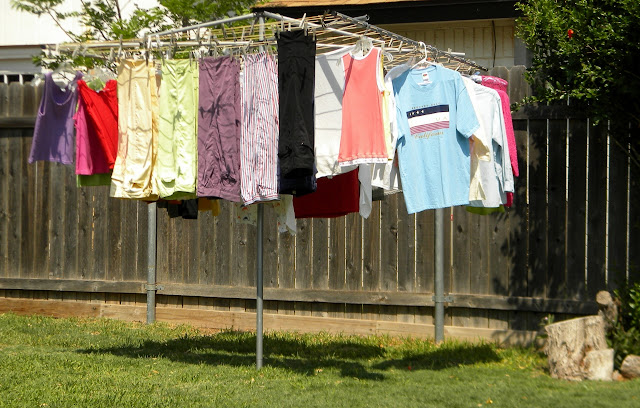 I haven't been able to catch them in or near the nest even though I have been
Stalking them by hiding in the Clothesline.
FYI on Cardinal Nesting:~The female builds the nest while the male keeps a close eye on her and the surrounding territory for predators and other males. The female will be the only one incubating the eggs.
~The males duty during this time is to feed her on the nest and protect their territory from intruders.
~Once the young hatch, both will feed them. Two broods each season are attempted.
~The nest is made up of twigs, bark strips, vines leaves, rootlets, paper, and lined with vines, grass and hair.
~You can find the nest placed in dense shrubbery or among branches of small trees. Generally 1-15 feet above ground.
~Laying 2-5 eggs that are buff-white with dark marks. The female incubates the eggs for 12- 13 days and the young leave the nest in 9-11 days after hatching.
I'll be keeping you posted on Mr. and Mrs. Redhead Cardinal's activities
and the birthing of the Red RoseBush Babies who I've named
Meeny Miney and Mo! 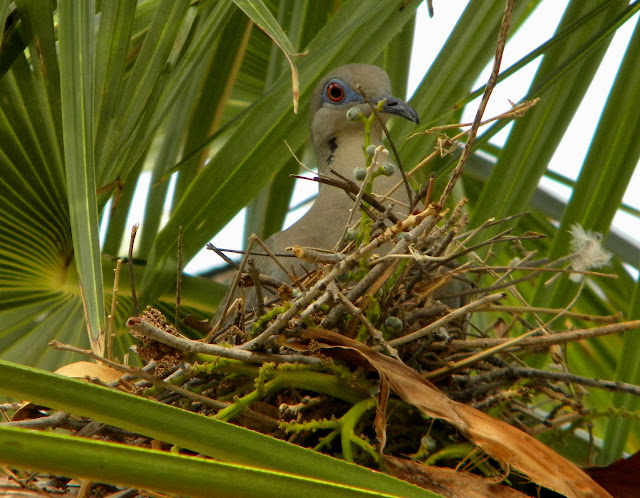 Remember the Lovey Dovey Weddin' that was held last month here at the Birdie B&B?
Well, Dovey and Lovey must have had quite a Honeymoon and wasted no time
settin' up housekeeping and nest building in the Palm Tree.
Lovey never moved a feather while I took her picture and Dovey kept watch on the Fence. 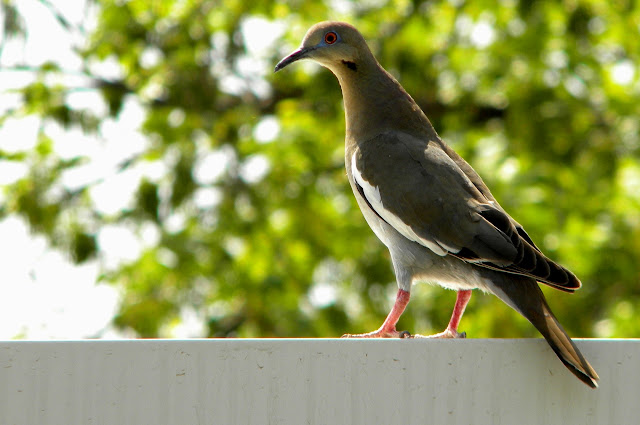 I'm going to have to get on the ladder to get a shot of their nest! 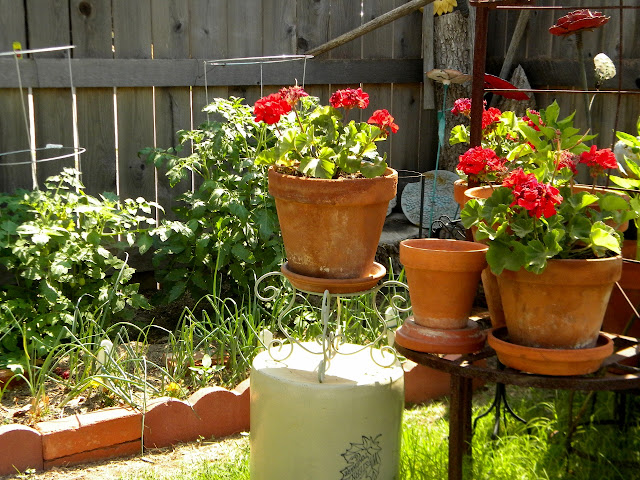 One thing for sure is that both Couples have been way to busy to be messin' with the Garden!
Aren't the Tomato Bushes lookin' good?
The Geraniums look good enough to eat...but I won't be eating them!
We will be eating Green Onions here in a week or so.
I don't think the Birds will mess with them either.
Speaking of Birds...I got a Pink Flamingo today! 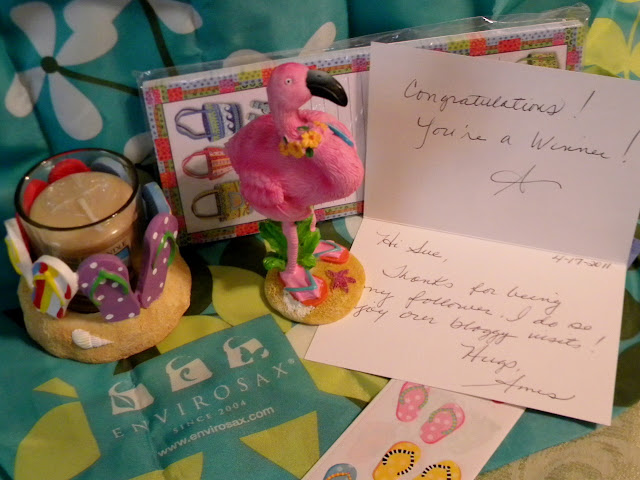 Yep, it flew in all the way from Florida wearing FlipFlops!
And brought this Texas Gal some cool FlipFlop Stickers, a FlipFlop Candle and Notepad.
And that's not all...The neatest Envirosax that folds up into a small packet.
As you can see by the note, I am the Winner of
Girl Raised In The South
Beachy GiveAway which celebrated her 50 Followers Mark!
Be sure and stop by Ames' Blog.  She's a Fellow Collector and a Talented Writer.

Congrats on your win. That was so cute and your tenants are such fun to watch too.

I love your clothes line...been trying to get hubby to one up for me...love the way sheets feel and smell after hanging on the line...love the cardinal eggs...

I am jealous. The one thing I miss about where I now live is I can't have a clothesline in my back yard. I have always had one and I really enjoyed hanging clothes. It was almost like meditation.

We also had a huge Gardenia bush that had a Cardinal's nest in it outside of our sunroom. It was so neat to watch the babies. Is it true that Cardinal's usually nest within 20 feet of their previous nest?

Glad you liked your Beachy booty and Thanks again for being my follower!~Ames

Wow! What a FUN package to receive in the mail from a friend!.. That's great!.. But climbing up a ladder to get closer to the nest?!!.. I thought you said the daddy birds are keeping an watchful eye on things and their job is to protect the nest and everybody IN it!... ARE YOU SURE YOU WANT TO DO THIS?!! I'd LOVE to see more pictures, but YOU BE CAREFUL!.. Oh, and Happy Easter to you! ~tina

You know, I've been hearing some rustling in one of my roses bushes. I wonder if I could find a nest in there?!? Hope you are not near those Texas forest fires we are hearing about!!!

Oh everything looks so lush and green there! Love the "red heads" to cute.

Congratulations on your win! That pink flamingo is a cutie.

I hope you and your family had a wonderful Easter. I've missed you on Pink Saturday.