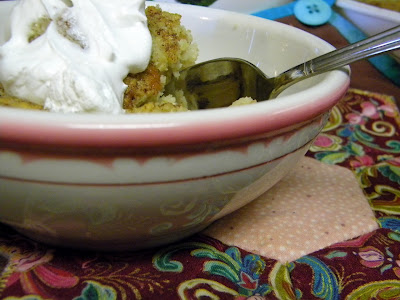 Are you wondering where the Pink Pudding is?

I could have made it Pink, but decided that since it wasn't in the New Joy of Cooking  Bread Pudding Recipe, I'd better not take a chance on messing up.  I did that once already this week...messed up a recipe.

In fact, my MessedUp Recipe is the reason I made Bread Pudding.  One of those if you happend to 'Get Lemons...Make Lemonade' deals! 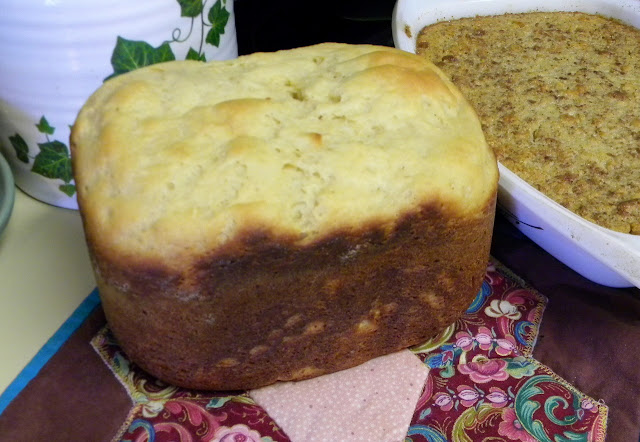 Yep, I BAKED BREAD!  This is my SECOND attempt.  WhaLa!  It really does look like Bread!
Let me give you a bit of background information on Me and Bread!  I'm allergic to Wheat!
I've done without bread for several years!
It's been okay having corn tortilla sandwiches and making corn bread.
I've found several other flours I use for cooking and corn starch is a staple in my cupboard!
I've been to LAZY to MAKE BREAD...until NOW! 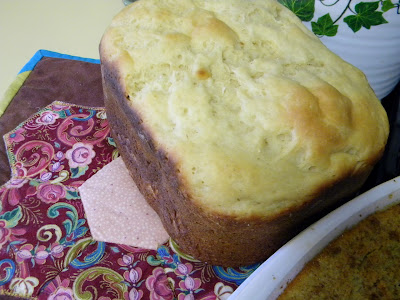 I finally got a Bread Machine!

OMGosh, I thought this was going to be sooooo easy....even with the Gluten Free Flour Mix.  That's another post..."I Made Flour"!

And you know if I'd had the right instructions for the first batch, it might have been better.

Anyway, the first batch baked waaaay to long and looked like ..... indescribable....I should have taken a picture.  It tasted good!  So I crumbled it up for the Bread Pudding!

Now, this was my first attempt at making bread pudding and since I started my New Joy of Cooking Challenge in January,  I thought this would be a good time try out it's Bread Pudding Recipe.  How hard could it be? 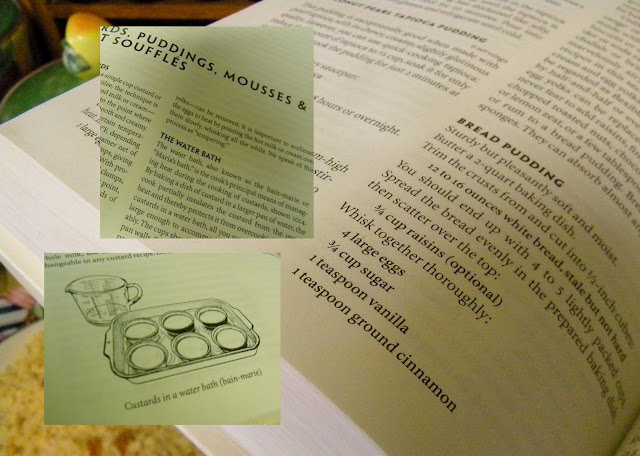 Not too hard and I had all the ingredients....until....I got to....
Bake at 350 degrees in a Water Bath aka Bain-Marie!
Marie who?
I don't often have to do research before baking!
Thankfully The New Joy had a reference with pictures for the Water Bath Baking Method!
It's pretty cool, Ya'll !!! 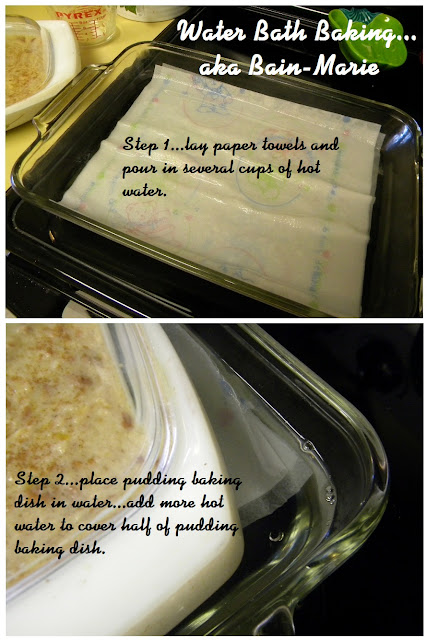 (click on photo to enlarge)
The Water Bath is the cook's principal means of managing heat during the cooking of custards.  By baking a dish of custard in a larger pan of water, the cook partially insulates the custard from the oven's heat and thereby protects it from overcooking. 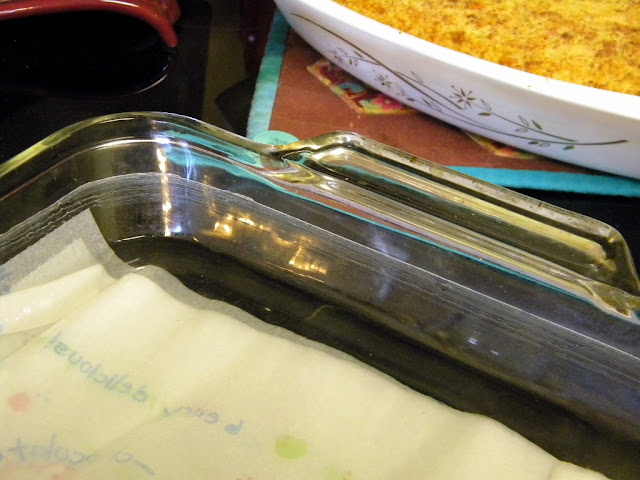 Notice the water level line and how much water was left after baking the bread pudding....
which I now know is a custard!
How was that Bread Pudding/Custard?  I'm glad you asked!!! 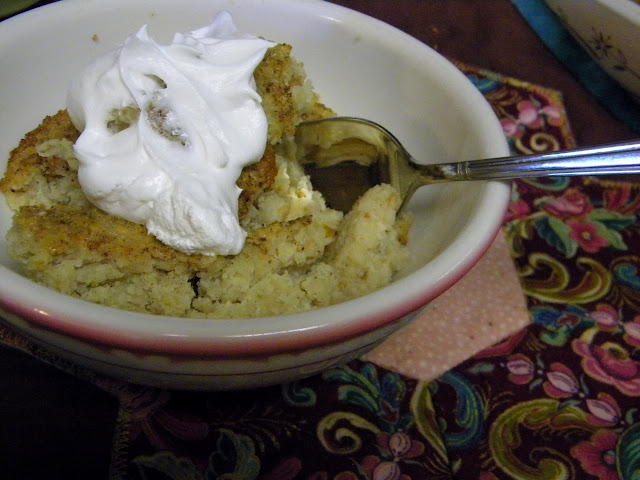 It was Yummy!
I am Tickled Pink with BathBaking!
and
To Be Participating in
Beverly's Pink Saturday at How Sweet The Sound
As Always, thanks Beverly for making Saturday Pink!

Good for you Sue, making bread and pudding! I love bread pudding and haven't had it in years-enjoy:@)

Jil~Say It With Roses said...

Your bread pudding looks scrumptious! My mom made the most heavenly bread pudding and somehow, mine is never that great....it was good to learn about the bath baking....makes things nice and moist!
Happy Pik Saturday!
Jil

That bowl is beautiful and what comes next looks so yummy, I want some of that!! Good for you and all that you are learning to do. I can't wait to hear more.
Happy Pink Saturday, Char

Bread Pudding is such a favorite of mine, you'rs looks really good. I've never tried this method. I'm sure it can be a challenge to cook without wheat!!!!
Have a great weekend.
ann

Oh! I love bread pudding too. I can't eat bread either. I've never tried that gluten free flour but I just might have to now.
Have a wonderful Pink Saturday!

Happy Pink Saturday Sue Sweetie...
What a beautiful share you have today. I love the looks of the recipe. You are in the pink baking today girl.

I have never heard of this water bath either. A really beautiful bread pudding from that little bath tub (ha-ha) too.

Thank you for sharing sweet friend. I hope you have a beautiful weekend. Many hugs and much love, Sherry

I like a really good bread pudding too - with custard!

I LOVE seeing a cook find a new recipe or method which is pleasing and fun and will be used often. This looks simply scrumptious.

A friend has been gluten-free for several years now, and she makes the most wonderful breads and cakes---even cream puffs. She's taught herself all the methods and has quite a few flours which she uses in place of wheat.

And her Orange/Almond cake! I'm craving some right now.

PS on the Bain Marie: You did it JUST RIGHT. A metal pan will sometimes discolor from the water.

AAh, bread pudding...one of my favorites!

I think the bread looks fantastic! Award winning!
Why don't I bake? I think I need a new kitchen.

The bread looks good but the bread pudding looks scrumptious! I love the way you made lemonade!! Hope you have a wonderful pink week!

It must be hard to be allergic to wheat - I have a couple of friends who are - and it was work at first - healthy though.

That looks delish and I'm glad you were able to do it.

Hi Sue, that does look yummy..would love that recipe! I have custard cups and could figure out that bath thing!

That bread pudding looks so good! I now know why mine hasn't been as good...my recipe never mentioned the water bathe method. I don't bake bread either but I really should learn since I do love all the grainy breads.

Happy Pink!
Have a wonderful week...

Hello Sue, happy belated pink Sat. Thank you for your well wishes for my sister's birthday.
My sister's party was wonderful and she loved every minute of the fun, food and most of all, her family and friends who attended. She ended up with lots of lovely gifts, lovingly given from a crowd of 34 people to help her celebrate being 70.

Our cousin Pat was here for 10 days and we hardly ever get to see her. She was a surprise for Jane Anne's party. Bob (cousin) brought her here for the party and we took her home to Columbia, SC this morning. An eight hour round trip. I tried to watch the Academy Awards and slept through through most of it. Darn. As usual lately, I have had little time on my computer.

I love to make bread and bread pudding. Thankfully I am not allergic to wheat. I'm glad you are having fun testing gluten free bread. I am also glad your bread pudding was a success. You are the half full glass kind of gal. I truly admire your upbeat happy posts. You always make me smile and sometimes get a good belly laugh out of me.

I hope I will have more time on my computer now that my company is gone and the party is over.
Love ya, Jeanne